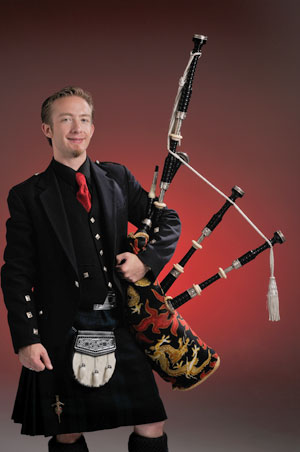 David Brewer is a founding member of the popular West Coast Celtic band, Molly’s Revenge, which was voted Best Band of 2005 at the Live Oak Music Festival in Santa Ynez, California. Molly’s Revenge has performed nationally and internationally with highlight appearances at the Chicago Irish Festival, the University of Hawaii Concert Series, the Ballarat Federation Tattoo in Australia, the Tamar Valley Folk Festival in Tasmania, twice at the Shanghai International Music Festival in China, and most recently in 2009 at Celtic Connections in Glasgow, Scotland.

David was raised in Oregon and is of Scottish descent. He discovered traditional music listening to public radio at the age of 11. He soon traveled to Scotland to study with master teachers. On his own, he has been a featured soloist at Barra Feis Piping Recital in Scotland, has been a featured highland piper with both the North State and Napa Valley Symphonies, and has toured nationally with Tomaseen Foley’s Celtic Christmas Show as the featured uilleann piper. In addition, David was the piper on a West Coast tour with Scottish super-group The Old Blind Dogs, a special guest of the six-time Grammy winning group The Chieftains, and a key musician for the sound track of the PBS documentary, “Andrew Jackson: Good, Evil & the Presidency.”

Also an avid teacher, David has taught at many notable workshops including the Pebble Beach Piping School, Sebastopol Celtic Music Festival, and the Community Music School of Santa Cruz summer camps. He is the founder of the St. Andrew’s Academy concert series and has been a guest lecturer on bagpipe history at UC Santa Cruz. David continues to teach privately. Some of his students have received accolades from the National Piping Centre of Scotland, while others have gone on to successful solo careers.

Studio Musician:
David has been contracted to play pipes, bodhran, and whistles for indie films, commercials, and most recently the PBS special on Andrew Jackson. As a solo artist, David appeared on San Francisco television three times performing on the Bruce Latimer Musical Variety Show, including a special appearance on the 800th anniversary show. He has appeared as a guest artist on over a dozen studio albums of various musical styles, and has composed over 200 original tunes. In 2004, he released his first solo album, Living Tradition, which features several of these tunes. David’s music is regularly aired on NPR radio.

This site uses Akismet to reduce spam. Learn how your comment data is processed.